Exposure to the alphabet early on is important for young children. Knowing the alphabet and the sounds they make—letter-sound correspondence—is a step closer to learning to read and write. The letters in the alphabet are the building blocks for literacy. Children who have difficulties recognizing letters from the alphabet and/or the sounds that corresponds with the letter are likely to struggle with reading and spelling. This is one reason why children with speech and language delays tend to be at risk for reading and writing challenges. Learning all 26 letters at once can be a daunting task, especially for a young toddler; however, you don’t need to learn the ABCs all at once. Start by having them recognize the letters in their names first. There are various activities that you and your toddler can do together in order to begin helping them recognize the letters of the alphabet and the sounds they make.

For this activity you will need: green construction paper, paper towel roll, glue, scissors, markers and colored dot labels. Before you begin the activity with your toddler, make sure to write all upper case letters all over the paper towel roll and write the lower case letters on to the color dot labels. Once you’ve done this you can have your child cut out some “leaves” from the green construction paper and glue them on to the top of the “tree.” After the leaves dry, you and your toddler are ready to begin! Before you start rereading the story, instruct your toddler to place the lower case letters next to their counter parts as you reread the story.

If the craft part of this activity may be too much for your child or to much of a hassle, you can have your child draw and color a coconut tree instead. Also, if you think your toddler knows his letters (both upper and lower case letters) then you can try having them write down the letters of the alphabet on to the the paper towel roll and/or color dot labels. This will give them a chance to practice fine motor skills that go with writing such as a good grip and control of a pencil.

Alphabet to the rescue 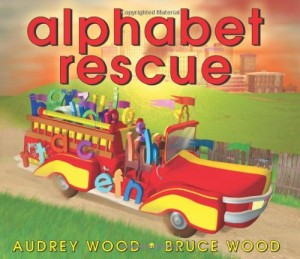 “Alphabet Rescue” by Audrey Wood and Bruce Wood is another great book that helps toddlers learn the ABCs. Not only does the book teach the letters of the alphabet but it also teaches your toddler basic fire safety. There are also various activity you can do with this book as well with your toddler. An interactive game that I found is “Alphabet to the Rescue.”

For this activity you will need magnetic alphabet letters and painters tape. Using the painter tape, make a ladder on the floor in front of your refrigerator. Place all the letters you and your toddler are working on on the refrigerator. Once you’ve done this, instruct your toddler to “climb” the “ladder” by crawling over the “ladder,” in order to “rescue” the letter that you call out. For example, “The letter “a” needs to be rescue.” You can also call out the sound the letter makes in order to practice letter-sound correspondence. Make sure your toddler also repeats the letter and/or sound when they “rescue” the letter.

This activity not only involves good listening skills, but it also involves following directions as your toddler will have to “rescue” the letter that you call out (or sound out). Protip: This activity can also be altered to help your toddler spell. Instead of “rescuing” all the letters, have them “rescue” certain letters in order to spell out a word (i.e. “We need to save the “cat”, what letters do we need?”).

If you have an older child who has already mastered letter and sound recognition then this last activity may be a fun way to teach them to spell. 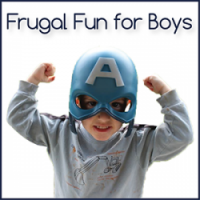 Frugal Fun 4 Boys suggests some great activities for early readers who … just … can’t … sit still. For this activity you will need to own the Twister board game. What you will want to do first is cover the game with single and consonant blends (i.e. /ch/). Once you’ve done this you can begin by calling out words that your child has to spell using hands and feet. It’s also a great way to practice your child’s spelling words.